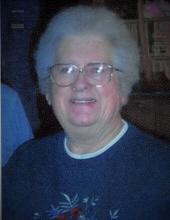 Evelyn Marie Dovico, 94, of Batavia, IA passed away Monday, November 16, 2020 at the Parkview Care Center in Fairfield, IA. A graveside service will begin at 1:00 p.m. on Friday, November 20, 2020 at the Batavia Cemetery with Pastor Danny Cary officiating. In lieu of flowers, the family requests that memorial contributions in Evelyn’s honor be directed to the Alzheimer’s Association. Friends may leave online condolences at www.cranstonfamilyfuneralhome.com.

Evelyn Marie Dovico was born on August 13, 1926 in Utica, IA to Manly and Hazel Shampnoi Pratt. She grew up and attended school in Batavia, graduating from the Batavia High School. Not long after graduation Evelyn married the love of her life, Sam Dovico. The two were married in Fairfield, IA on January 13, 1946. Together they became the proud parents of 4 boys: Larry, Jerry, Gary, and Terry. Evelyn took care of the home and children while Sam was gone serving his country, and she continued to do so upon his return. She worked outside the home at several different jobs including a switchboard operator at the Batavia Telephone Office and a waitress at several local restaurants. Evelyn also served on the Election Board and helped manage the community building for many years. She was a wonderful cook who was known for her angel food cake on birthdays, pumpkin pie, and homemade noodles. She was a life-long member of the Batavia Community and cared deeply for her town. Evelyn was a loving mother and grandmother who will be deeply missed by her family, her community, and her many friends.

Evelyn was preceded in death by her parents, her husband, Sam Dovico, as well as four siblings, Richard, Porter, Bert, and Frieda.