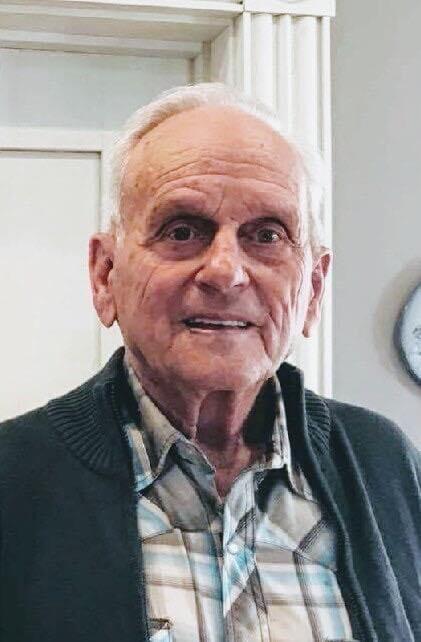 Ervin Earl McCracken, 94, of Keosauqua passed away at 7:47 Saturday February 26, 2022 at the Keosauqua Health Care Center.  Visitation will open at 2:00PM with family present from 5 to 7PM on Tuesday March 1, 2022 at Pedrick Funeral Home, Keosauqua.  Funeral services will be at 10:30 AM Wednesday March 2, 2022 at the funeral home with Pastor Mark Caston officiating.  Cremation will follow the service and burial of cremains with military honors by Sargeant-Osweiler Post No. 563 American Legion will be at Bonaparte Cemetery at 2:00 PM Monday March 7, 2022.  Memorials to Bonaparte Cemetery or Bentonsport Cemetery may be left at the funeral home or mailed to the family at 28361 Route J40, Keosauqua, IA 52565.

Ervin was born on February 17, 1928 on the family farm near Keosauqua to Richard Earl and Nellie Mae Walter McCracken.  He attended school at the Woods school house and graduated from Bonaparte High School in 1947.  Ervin worked on the family farm until he joined the army in his early 20’s and was quickly sent to Korea. He was there for a short time when he lost his leg and received the Purple Heart. He then returned home to Keosauqua and worked on the farm.  During this time, he met Donna Rosalie Winkler and they were married on September 9, 1953 at the Keosauqua United Methodist Church.  Ervin lived and worked the family farm until his health declined when he was 93 and he had to retire to town.  Ervin was on the Bentonsport Cemetery Board and was a life-long member of the Sargeant-Osweiler Post No. 563 American Legion in Bonaparte.

In addition to his parents he was preceded in death by his wife, Donna, a daughter in infancy, Glenda Rosalie McCracken, three sisters, Vera Behm, Mary Alice Keller and Leah McCracken, two daughters-in-law, Melinda McCracken and Julie McCracken and a step granddaughter, Tiffany Butler.