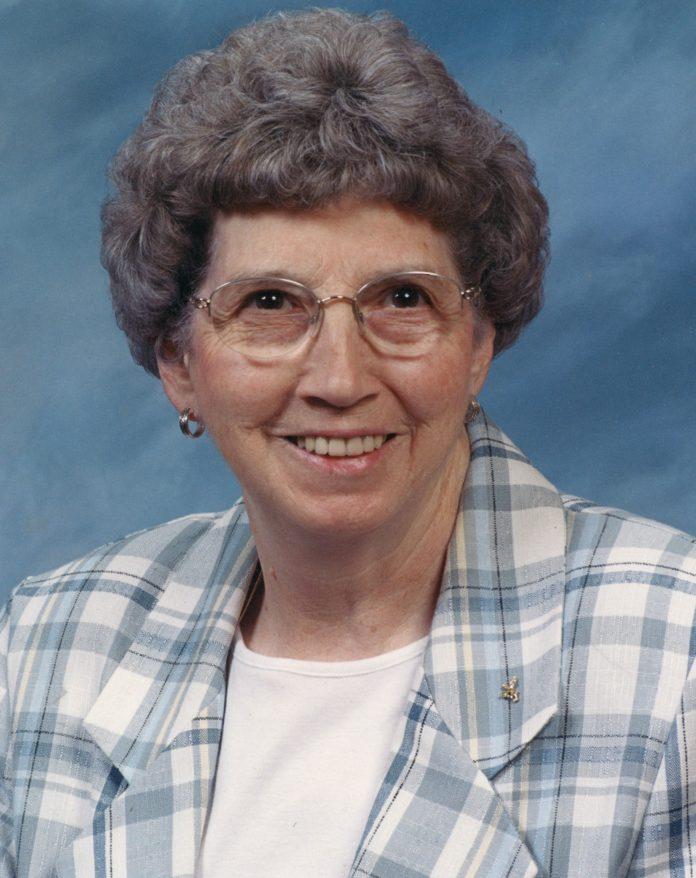 Erma Ruth McCormick, 97, of Packwood, IA passed away on Wednesday, September 14, 2022, at the Addington Place in Fairfield, IA. As were her wishes her body has been cremated. A memorial service in her honor will be held at 11:00 a.m. on Saturday, September 24, 2022, at the Prairie View Methodist Church with Pastor Steve Lamb officiating. Burial will be held privately in the Packwood Cemetery. A
visitation will begin at 9:30 a.m. on Saturday, September 24, 2022, at the church and will last until the time of service. Memorial contributions in Erma’s honor may be directed to the Prairie View Methodist Church, Packwood Community Building, or to the Packwood Fire Department. Friends may leave online condolences at www.cranstonfamilyfuneralhome.com.

Erma Ruth McCormick was born on August 30, 1925, in Salem, IA to Glen and Anna Moxley Haines. She was raised on the family farm south of Winfield, IA and graduated from Winfield High School with the class of 1942. In 1944 she married the love of her life, George McCormick. Erma and George had met several years earlier while George was on leave from the Navy and had taken a job working for Erma’s father on the farm. Erma traveled to Rhode Island where George was stationed and worked in the discharge department for the United States Navy. She eventually moved back to the area while George finished his enlistment and the two settled on the family farm near Packwood. They would make this their home for the remainder of their lives. Erma and George were the loving parents of 4 children, Robert, Richard, Michael, and Beverly. Erma loved her role as mother and took care of everything around the home. In 1968 she began working for Dickey Transport and spent many years there as a dedicated employee. Erma always loved a good dance and enjoyed jigsaw puzzles and crocheting. She enjoyed playing a game of cards and spending time with her grandchildren. She was active in the community, serving on the Board of Packwood Community Building and was a member of the Eastern Star, American Legion Auxiliary Unit #504, and volunteer for many years at the VA Hospital in Iowa City.

She also was a lifetime member of the JCHC Hospital Auxiliary the Fairfield VFW Auxiliary. Erma was an active member of the Prairie View Methodist Church and the United Methodist Women. She will be missed by her family and her many friends.