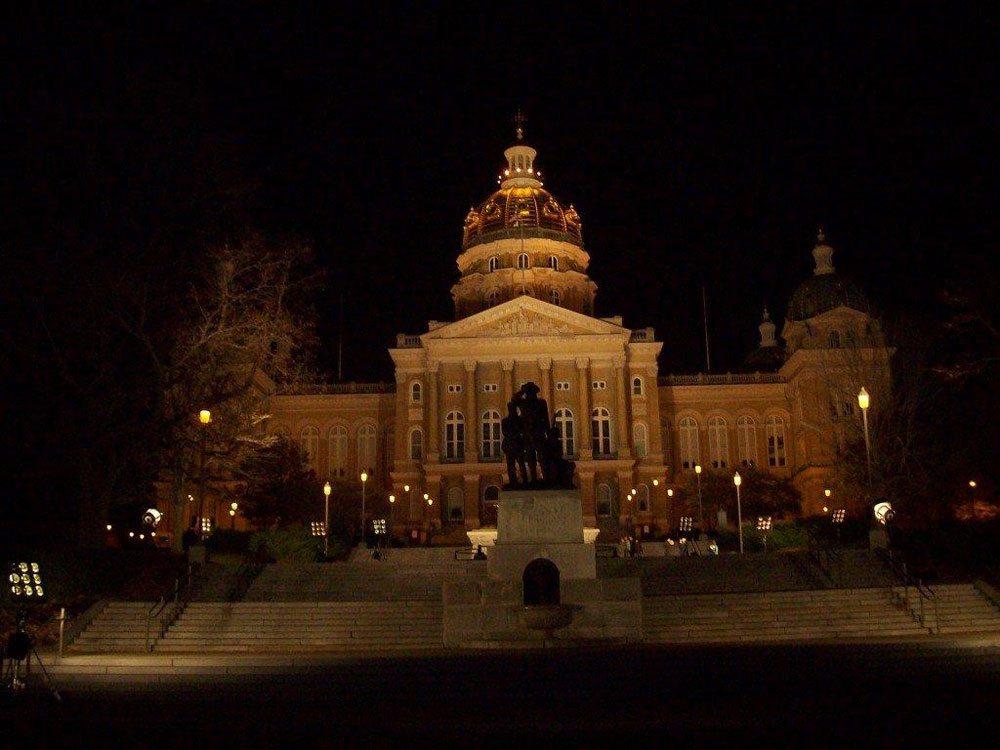 Mark Logsdon, commander of the Iowa State Patrol unit that provides security at the capitol, says custodial staff discovered the fire and called in the alarm about 5:45.

“The State Fire Marshal’s Office has investigated and it appears that it’s electrical in nature,” Logsdon says.

The fire was in a small office on the first floor that’s used by staff who work for House Republicans. Sprinklers deployed and actually put the fire out before fire fighters arrived. Smoke poured into the statehouse rotunda, however. Crews set up powerful exhaust fans to try to pump the smoke out.

“To ventilate it out of that huge, cavernous building that the capitol is,” Logsdon says. “The old saying is smoke rises. Well, it certainly does and so we have the doors open to the top of the dome and we’re ventilating the smoke straight up through the center part of the building, up through the dome and out that way and it certainly seems to be helping quite a bit.”

In a bit of irony, crews had been in the statehouse earlier Tuesday, testing the sprinkler system.

“It’s a good example of the importance of good detection and due diligence and the environment people work in and we were very, very fortunate with this,” Logsdon says.

At 2:38 a.m. Wednesday morning, the governor’s spokesman issued a statement via email, indicating chemicals from a fire extinguisher, rather than the sprinkler system, had doused the fire. “The fire…was extinguished by building personnel with a fire extinguisher,” Ben Hammes wrote. “No one was hurt. (The Department of Administrative Services) is assessing the damage.”

The House chamber in the capitol was heavily damaged by fire in 1904. In 2005 — on Christmas Eve — a water pipe in the 4th floor capitol attic burst, sending two-thousand gallons of water cascading throughout the northeast side of the building. It took a few years for the thick plaster walls that had been saturated to completely dry.