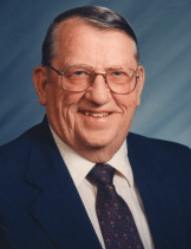 He was born April 8, 1927 in Keokuk County to William Henry and Hattie Mae Morrison Wilkerson. He married Shirley A. Thomas October 1, 1948 and she preceded him in death November 24, 2014.

A graduate of North English High School in 1944, Ed served in the Army Air Corp during World War II, serving in the Aleutian Islands. He worked 39 years for the Ottumwa Courier, retiring as Production Manager in 1994.

He was a charter member of Questers and was past president of the American Little League.

Visitation will be open after 11 a.m. Monday, November 29th at Reece Funeral Home with family present to greet friends from 5 p.m. to 7 p.m. Monday.

Funeral Services will be 1 p.m. Tuesday, November 30th at Reece Funeral Home with Pastor Mel Kendall officiating. For those unable to attend, you may watch live on the Reece Funeral Home Facebook page. Burial will be in Shaul Cemetery with military services conducted by Walter B. Schafer Post #775 Veterans of Foreign Wars and O.B. Nelson Post #3 American Legion.

Memorials may be made to Indian Hills Community College Foundation or Hospice Serving Davis and Wapello Counties.