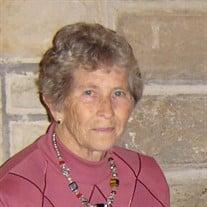 Doris Mae Showman, 89, of Oskaloosa, died on Tuesday, May 03, 2022, at the MHP Serenity Hospice House in Oskaloosa. She was born on Sunday, February 19, 1933, southwest of Eddyville, Iowa, in Monroe County the daughter of Roy and Opal (Griggs) Shipman. She graduated from Eddyville High School with the Class of 1952. On October 5, 1952, Doris was united in marriage to Lyle Lavern Showman at the First Christian Church in Oskaloosa.

Together they bought a farm near Hedrick, Iowa in 1954. They raised chickens and farmed there until 1962. In 1962, they sold the farm near Hedrick and purchased a farm southwest of Oskaloosa where they farmed, and Doris milked several cows until their retirement in 2010. Doris and Lyle loved to go fishing and hunting, taking several trips to Colorado elk hunting and trips to Kenosha and Sheboygan, Wisconsin fishing for Salmon, along with deer hunting locally Doris was a housewife and took great pride in her family and helping Lyle on the farm. She was known for her large gardens of which she canned several jars, her flowers, fresh baked goods and her hospitality, the coffee was always ready and a fresh baked treat. She was a very talented seamstress and sewed several of her daughter’s outfits.
She is survived by her three daughters; Connie (Merle) Miller of Oskaloosa, Phyllis Heitsman and Linda Hartley of Ottumwa; six grandchildren, Michael (& Jennifer) Miller of Bethany, MO., James (& Julie) Miller of Oskaloosa, Jodie (& Davis) Eidahl of Solon, IA., Joshua (& Stephanie) Heitsman of Princeton, IA., Jesse Heitsman of Oskaloosa and Clayton (& Shelby) Sheedy of Ottumwa and a step-daughter, Tabatha (& Steve) Hartley in Arizona. Ten great grandchildren; Riley (& fiancée Sydney Katko), Emily, Brooklyn and Gabriela Miller; True (& fiancée Sayler Mcillravy), Trin and Trea Eidahl; and Jace, Jax and Saylor Heitsman; Crew and Wrenley Sheedy; and a step great grandson, Nicholas Luna; two sisters; Margaret Wells of Newton and Nellie Winkleman of Beacon; two brother-in-law’s, Gerald Showman of Cedar Rapids and Jack (& Chris) Showman of Ottumwa as well as several nieces and nephews.