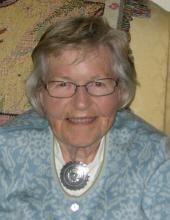 A graduate of Ottumwa High School, Connie attended Lindenwood College and Iowa State University, earning a degree in dietetics. As the first woman to be college educated in her family, Connie was a staunch advocate for women’s rights and advanced education.

Following graduation and while Bob was serving in WWII, Connie spent time in Chicago and Red Oak working as a dietician. During early years of their marriage, Connie and Bob called many places home including Mt. Vernon, Creston, and Hedrick before settling in Ottumwa where they lived the majority of their lives.

After her children were in school, Connie attended Parsons College, earning a degree in education. Connie taught home economics at Ottumwa High School and started the HERO program.

Connie was active in her community, founding the Ottumwa chapter of AAUW, serving as a 4-H judge, and member and former president of PEO Chapter HR, as well as many other organizations. Throughout retirement, she and Bob loved to travel the world through Elderhostel Programs, visiting over 130 countries. They hosted numerous visitors at their home. In 2000, Connie and Bob were awarded the Ageless Hero Award from Wellmark for their travels.

Connie enjoyed playing Mah-Jong with her friends and husband and was an avid swimmer throughout her life.

Known for their large family gatherings, Connie and Bob often had a house filled with family, friends, and community newcomers.

She was preceded in death by her parents and brother, Robert Baker.

Private family memorial services will be held at Reece Funeral Home with Rev. Judy Thompson-Reitz officiating. The service will be livestreamed for the public at 1 p.m. Tuesday, February 23rd on the Reece Funeral Home Facebook page. Online condolences may be left for the family at www.rfh-ia.com.

Inurnment will be in Ottumwa Cemetery at a later date.