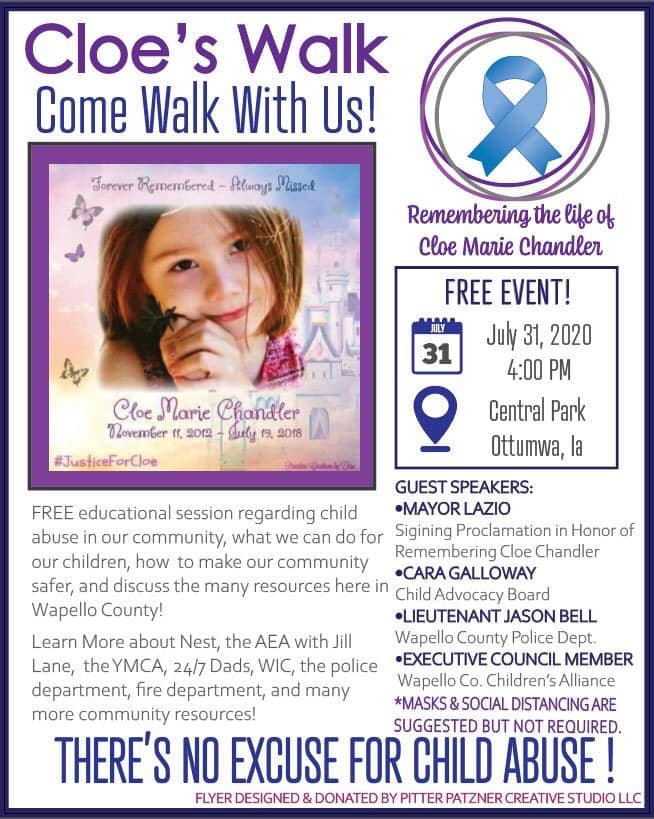 A pair of Ottumwa mothers that started a Facebook page to honor a local girl who lost her life will be holding walk in her honor later this month–and are hoping to raise awareness in the process.

Janna Kirkman and Audrea McMullen started “Justice for Cloe,” a Facebook page dedicated to Cloe Chandler, a five-year-old girl who police say was strangled to death in July 2018. Kirkman says the group had around 450 members the first two years. However, a recent case in which the photos of an abused two-year-old girl circulated social media caused the membership to grow to nearly 800.

In the past, Kirkman and McMullen have organized a candlelight vigil and a balloon release in Cloe’s memory. On July 31st at 4:00 PM, the mothers will be holding Cloe’s Walk, an event dedicated to the memory of a girl the pair calls “bubbly, sassy, and bright.”

Kirkman and McMullen want to raise awareness and let attendees know that child abuse touches us all.

“That’s a lot of the reason for this walk,” Said Mcmullen. “To educate the entire community on child abuse.”

Information that covers signs to spot child abuse, what can be done for children, and resources for parents will available to everyone who attends Cloe’s Walk.

Kirkman and McMullen say Mayor Tom Lazio plans to come to the event. The mothers say Lazio will sign a proclamation at the walk, declaring July 31st as “Cloe’s Day.”

The walk is free to attend. McMullen discussed who she would like to see at the event.

“we would like all of you to come and be a part of your community to raise awareness and educate yourselves so you know the warning signs [of child abuse],” Mcmullan said. “you could be the voice that that child needs.”