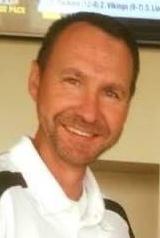 In lieu of flowers, memorials may be made to Burlington Little League or go towards his children Conner and Audrey’s education.  Cards and memorials may be mailed to Dick and Mary Reed, 709 S. Maple Street, Fairfield, Iowa 52556.

Chris graduated from Fairfield High School Class 1992.  He attended his first two years at SE Community College and transferred to Western Illinois University and majored in Sports Medicine.  In August of 1998 he went back to school and earned his Master in Exercise Science.  He did his internship with the St. Louis Rams.  Chris employed by Industrial Therapy Solutions as an Industrial Therapist.  He was very active in the Burlington community.  He was on the Burlington City Council, Burlington Planning & Zoning, and took on the responsibility of Mayor Pro Tem of Burlington.    Chris was past president/assistant coach for the Burlington Little League.  He enjoyed biking and participated in Ragbrai Across Iowa.  Some of the organizations Chris was a member of was NATA (National Athletic Trainers Association), CSCS (Certified Strength & Conditioning Specialist) and Fairfield Elks Lodge #1192.  Chris attended the First Christian Church and volunteered to drive the church bus.  He was an avid Hawkeye fan and collected St. Louis Memorabilia.  Chris loved his children and was very proud of them.

He will be missed by his children Conner and Audrey Reed of Burlington; parents, Dick and Mary Reed of Fairfield; his siblings, Kimberly (Steve) Winslow and Jeffrey Reed both of Fairfield; nieces, Brittany (fiancé, Tanner Metcalf) Winslow, Erica Winslow; and nephew, Austin Winslow.

Chris was preceded in death by his grandparents, Norma and George Holmes and Elvin and Lurena Reed; and uncle, Stephen Holmes.

On-line condolences may be made the family at behnerfh.com.