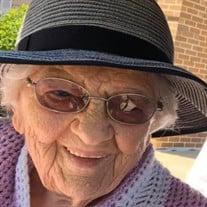 Christina Mich, 100, of Oskaloosa, died Wednesday, June 22, 2022, at the Northern Mahaska Specialty Care Center in Oskaloosa. She was born August 3, 1921, in Wapello County, Iowa, the daughter of Christian and Gertrude Cornelissen Verploegh. She attended country school in the Eddyville area. Following school she worked as a nanny and housekeeper for families in the area. On June 12, 1946, she was united in marriage to Karl Mich in Oskaloosa. To this union two children were born Mark and Lorraine. Christina worked for a short time at the old Continental Overall Factory in Oskaloosa. After a few years at the overall factory, she dedicated her time and effort into caring for her family and home. She was the oldest and faithful member of St. Mary’s Catholic Church in Oskaloosa where she had been active with the Altar and Rosary Society. She was also a member of the Fraternal Order of the Eagles Woman’s Auxiliary. She was an excellent cook and a dedicated wife, mother, and grandmother. She enjoyed playing cards and BINGO.

Christina was preceded in death by her husband Karl on May 10, 2003; her parents; a granddaughter, Angelina Mich; four brothers, Hank, John, Christian, and Wilbur Verploegh; and a sister, Anna Lehman.

Mass of the Christian Burial will be held Thursday, June 30, 2022, at 10:30 a.m. in the St. Mary’s Catholic Church in Oskaloosa with Reverend Troy Richmond officiating. Burial will be in the St. Mary’s Cemetery in Oskaloosa. The Bates Funeral Chapel is in charge of the arrangements. Visitation will begin Wednesday, June 29, 2022, after 11:00 a.m. in the Bates Funeral Chapel. The family invites those who would like to pray the rosary with them at the funeral home at 5:00 p.m. on Wednesday evening and they will be at the funeral home until 7 p.m. to greet friends and relatives. In lieu of flowers, the family requests memorials may be made to MHP Hospice Serenity House or St. Mary’s Catholic Church.