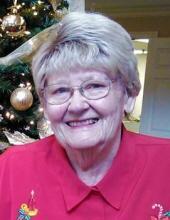 Carol graduated from Washburn High School in 1945 and Carleton College in 1949.

She was a member of First Christian Church. She had served on the Women’s Crisis Center board, the board for League of Women Voters, the Kennedy-King Scholarship committee and as a den mother for Cub Scouts. She was involved in International Day, the Human Rights Commission and equipping Ottumwa with the Audible Outdoor Warning Sirens. She also volunteered for Habitat for Humanity and at the Festival of Trees.

She was preceded in death by her parents; a son, Brent Arthur Williams, two brothers, Arthur and Robert Eustis.
Her body has been cremated. Memorial services will be held at a later date. Private inurnment will be in Memorial Lawn Cemetery.

Memorials may be made to League of Women Voters, Kennedy-King Scholarship Fund or Heartland Humane Society.