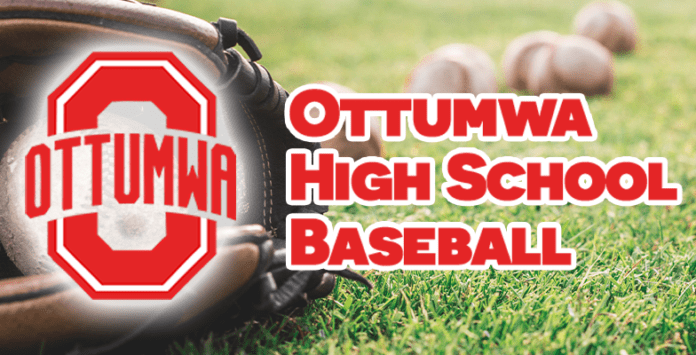 The Ottumwa High baseball team needed to bounce back from Monday’s disappointment at Mason City, if the Bulldogs wanted to carry any momentum into the substate playoffs. A pair of wins over a conference rival on Tuesday did just that.

OHS swept Des Moines East at Legion Memorial Field, winning game one 13-2 in five innings, before securing the nightcap 5-3. Ottumwa finished the regular season above .500 at 11-10, and a 7-3 mark in the CIML Metro Conference moved the Bulldogs into second place.

The result of the opener was all but certain after Ottumwa exploded for eight runs in the second inning. OHS loaded the bases with one out, and scored the first run when Mitch Wood was hit by a pitch. Jesus Jaime then stepped to the plate and blasted a grand slam over the 370-foot sign in left-center field. OHS tacked on three more runs in the frame, then came back to score five more in the third inning, highlighted by Blaze Rominger’s two-run single.

On the mound, Marcus Saunders allowed just one hit over three innings to earn his fourth win of the season. East got a pair of runs back in the fifth inning, but couldn’t score enough to keep the game from ending on the ten-run rule.

It looked like game two would have a similar outcome, as Ottumwa scored two runs in the first and two more in the second. Trae Swartz and Brody Evans each drew bases-loaded walks in the opening frame, while Wood hit an RBI triple, then scored on a Jaime groundout in the second. East, meanwhile, could do little against Bulldog starter Rion Slack (2-0). The junior allowed just an unearned run in his four innings of work, surrendering only two hits and striking out eight.

The Scarlets came alive in the fifth, however, scoring a pair of runs against the Ottumwa bullpen and cutting the lead to 4-3. OHS got a much-needed insurance run in the bottom of the fifth on a sacrifice fly by Andrew Cole. The Bulldogs then put the game in the hands of Jackson Saunders. The junior retired all six batters he faced, tossing two perfect innings to earn his first save.

Ottumwa begins the Class 4A substate playoffs Friday night on the road at Ankeny Centennial. First pitch is scheduled for 7:00 on 1240 AM/102.7 FM KBIZ, with the live video stream on this website.