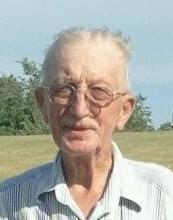 There will be a private family service with a  Celebration of Life at a later date.

Buddy was born April 6, 1928, in Versailles, Missouri to Justin and Bessie (Birka) North.  He married Neva Roberts in Fairfield.

Buddy farmed majority of his life and enjoyed being outside on the farm or working on projects in his shop.  He would get great pleasure in playing shenanigans on his friends or family.  Most important to him was spending time with his son and grandchildren.

Buddy will be missed by his wife, Neva of Bonaparte; two grandchildren, Angela (Jesse) Leazer of North Liberty and Ryan North of Florida; one great grandson, Jaxon Leazer; and his sister, Agatha North.

Buddy was preceded in death by his parents, Justin and Bessie North; and his son, Alan Bruce North.