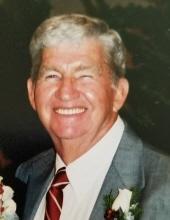 A 1947 graduate of Ottumwa High School, He served in the U.S. Army from 1948-1952; having served in Korea. Upon his return to Ottumwa he worked 35 years for the Milwaukee, Soo Line Railroad, retiring in 1986 as a conductor.

Bill and Yolanda loved to travel and spent 20 years wintering in Mission, TX. After his wife passed, he moved to Horicon, WI where he resided for the past 7 years. He greatly enjoyed attending his great-grandchildren’s events and many family gatherings.

He was proceeded in death by a son, Kevin Osteen; a brother, Don Osteen and a sister, Dorothy Brown.

Public graveside services and inurnment will be 10:30 a.m. Saturday, October 10, 2020 at Shaul Cemetery. Military services will be conducted by Walter B. Schafer Post #775 Veterans of Foreign Wars and O.B. Nelson Post #3 American Legion.

Memorials may be made to Hospice Serving Davis and Wapello Counties.