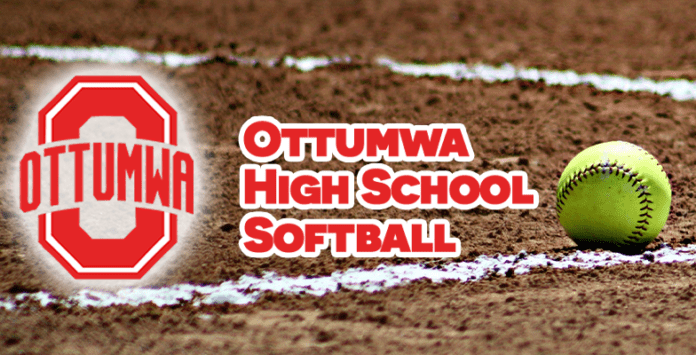 One of the beauties of softball (and baseball) is that there’s no clock; as long as a team has an out left, nothing is decided. The Ottumwa and Ames softball teams spent the last two innings demonstrating that beauty on a warm Wednesday afternoon.

Ottumwa’s six-run sixth inning broke open what had been a pitcher’s duel, but the Bulldogs still had to hold off a seventh-inning Ames rally to win 8-5. OHS improved to 3-4 on the season, while the Little Cyclones fell to 0-4.

Jordan Pauls drove in a pair of runs for the Bulldogs, and Kacy Nickerson put together a four-hit afternoon. Ottumwa scored eight runs despite never having that one “big” hit. They sent 12 batters to the plate in the sixth inning, and saw eight of them reach base in a row, with a combination of singles, walks and Ames errors.

For their part, the Little Cyclones never had a big hit either. Ames only managed three hits in the game, none of which came in the innings where they scored. They plated a run in the sixth and three more in the seventh by drawing eight walks and a hit by pitch. In all, Ottumwa won the game despite walking ten Ames batters.

Ashton Brown (2-1) picked up the win for Ottumwa after coming on in relief to start the second inning. Starting pitcher Kacy Nickerson only tossed one inning, after having pitched 18 the night before in the doubleheader versus Fort Dodge. Ashlynn Sheets recorded the final two outs for her first save. Jewels Buss (0-3) took the loss for Ames.

The Bulldog softball team returns to action Friday with a doubleheader at Marshalltown, then travels to Solon on Saturday for a pair of games in that annual tournament.