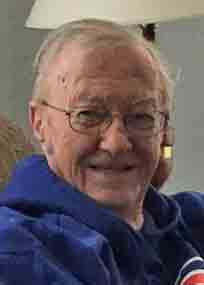 Art served in the Navy during the Korean.  Through the course of his working life, Art worked at Collins Radio in Cedar Rapids, taught data processing at Iowa Tech College in Ottumwa, worked at Louden Machinery in Fairfield, owned Pecks Billiards & Stonewall Lounge for several years in Fairfield and worked for Pinkerton Security in Fairfield.  He was state of Iowa president for the Eagles from 1987-1988 and was a member of the Fairfield Dixieland Band. Art was an avid Cubs fan and Iowa Hawkeye fan. He had a great sense of humor and loved to play pranks.  Art did not know a stranger.

Art will be missed by his wife, Rita of Fairfield; his children, Deb (Richard) Taylor and Pat Tarrence both of Fairfield, Bill Peck of Skiatook, Oklahoma and Randy (Shani) Peck of Litchfield, Minnesota; 11 grandchildren; 14 great grandchildren; daughter-in-law, Diana Peck; and one brother, Jerry (Pat) Peck of Guttenberg, Iowa.

Art was preceded in death by his parents, William and Doris; his son, Roger Peck; and one son-in-law, Rex Tarrence.

On line condolences may be made to the family at behnerfh.com.