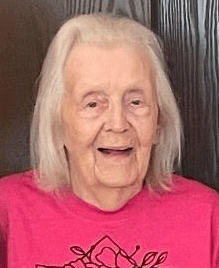 Alice L. Shafar, age 75, passed away peacefully at her home on December 22, 2022. Hospice had recently been brought in to help care for her after a two-year battle with kidney cancer. Alice was born in Racine, Wisconsin on February 9, 1927, was united in marriage with Max L. Shafar on September 24, 1947, and they moved to What Cheer, Iowa shortly thereafter.

During her years in What Cheer Alice was employed in various places, which include Salena’s Café where she worked as a waitress, and the City of What Cheer where she served as the city clerk. Alice also enjoyed working as the ticket manager for the What Cheer Opera House for quite a few years. At one time, the backstage of the opera house displayed various photos in which Alice was posing with big-band-era leaders such as Wayne King, The Glenn Miller Orchestra, The Guy Lombardo Orchestra, and others.

Alice enjoyed taking care of people, and she worked as a nurse’s aide at the Keokuk County Hospital for several years. Max and Alice divorced in 1981 and she moved to Fairfield, Iowa to be closer to her children. She found work at the Jefferson County Hospital where she was employed as a Certified Nurse’s Aide for 25 years until her retirement.  She was loved by many friends and co-workers as well as family.

Alice is survived by her three children:  Jim McKissick of Racine, Wisconsin, Jolyne Shafar of Agency, Iowa, and Jerry Shafar of Mt. Pleasant, Iowa.  Alice is also survived by five grandchildren, nine great-grand-children, and one great-great-grand-son.

Preceding her in death were her parents, two sisters, and one great-grandson. Behner Funeral Home of Fairfield, Iowa is in charge of the arrangements.  She had asked to be cremated, and services will be held in the spring when the weather is warmer and the peonies are in bloom at her final resting place, per her request. Her cremains will be laid to rest next to her mother and two sisters at Sixteen Cemetery, near Thornburg, Iowa, which is located approximately five miles north of What Cheer, Iowa.  In lieu of flowers, cards and condolences may be sent to: Jerry Shafar, 602 N. White Street, Mt. Pleasant, IA. 52641